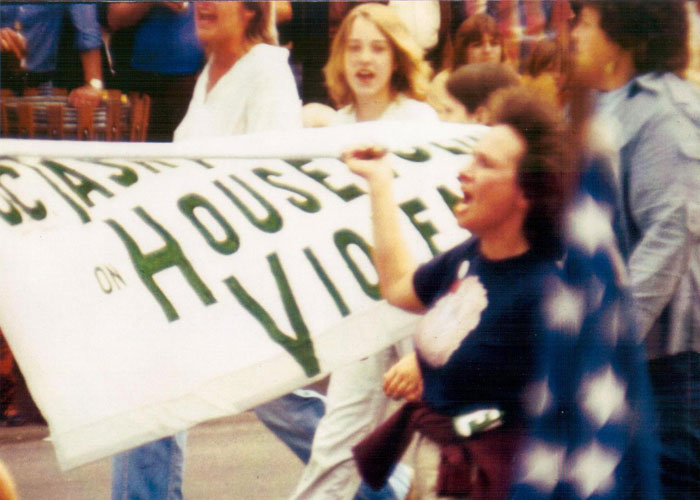 Rosemary’s herstory of activism can be traced back to 1966, when she first experienced an awakening while serving on the Panel of American Women, a group battling bigotry against Catholic, Jewish, and Black Americans.

In the early 1970s, Rosemary worked for the Northwest Community Organization (NCO) in Detroit, Michigan. The goal of the organization was to promote integration by helping black and white families work together to stabilize their neighborhoods. At the time, the dynamics of the city were changing, and Cooley High School was fast becoming predominantly black due to white exodus. NCO helped the police understand the components of racism as they settled conflicts.

Rosemary soon began working at New Detroit, Inc., a coalition of corporations and community organizations designed to address poverty and institutionalized racism. The coalition was a direct result of the burning of the Detroit inner city and the efforts of churches and organizations to stop discrimination, prejudice, and racism.

She served on the New Detroit Speakers Bureau for several years as well as participating in People Acting for Change Together, a grassroots speakers and training bureau that combated racism in the educational system.

Rosemary’s involvement in anti-racist demonstrations led to her anti-war; feminist and right-to-choose; and lesbian, gay, bisexual, transgender, and queer rights work. She views all of these causes as interconnected, united in a common goal to eliminate discrimination against the disabled, minorities, women, and gender diversity.

When Rosemary moved to Massachusetts to complete her MSW at Boston College, she quickly became a key figure in the political scene. She served on the Massachusetts Governor’s Commission on the Status of Women and was elected chair of the Boston Lesbian and Gay Political Alliance.

This alliance was designed to bring diversity issues to the legislative process. The group helped usher in the passage of the Gay Rights Law, launched a youth advocacy project, and conducted AIDS awareness activities.

Returning to Ashland, Oregon, in 1995, Rosemary soon established the Lesbian, Gay, Bisexual, & Transgender Political Caucus of Southern Oregon as well as a youth advocacy project. She was invited to serve on the Jackson County Women’s Commission and the Jackson County Mental Health Advisory Board. Rosemary later instituted a training group on transgender counseling and advocacy.

Rosemary’s commitment to justice focuses on individual and family self-restoration. She integrated issues of social justice into the classes she would later teach at SOU.

In January 1977, Rosemary launched Dunn House, a shelter for battered women and their children. Today, the organization serves more than 500 women and children a year.

She also cofounded Advocates for the Severely Handicapped, a progressive program and residence for the profoundly disabled.

Among many other honors, Rosemary has received the Community Works Visionary Award, Zonta International’s Women of the Year Award, and SOU’s Distinguished Alumni Award for her relentless activism on behalf of the oppressed.